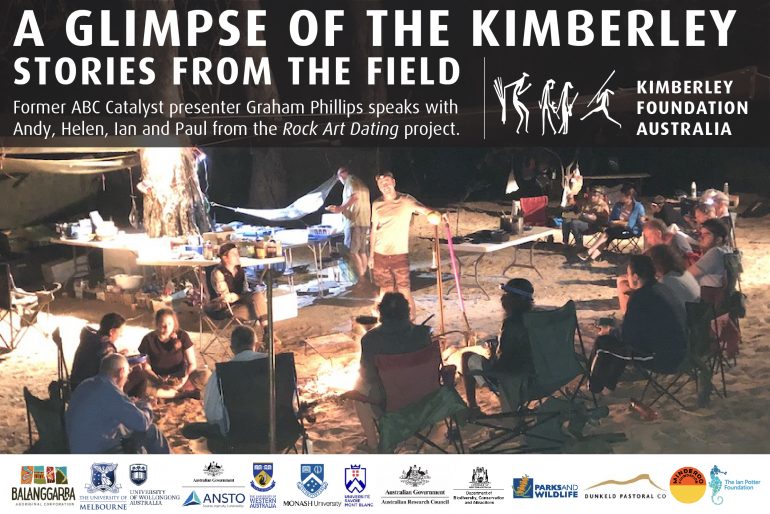 Last week more than 100 households joined our webinar A Glimpse of the Kimberley – Stories from the field featuring Traditional Owner Ian Waina, scientists Prof Andy Gleadow and Dr Helen Green, and logistics/outdoor manager Paul Hartley. The panellists gave us a taste of what it’s like in the field on the Rock Art Dating Project. They were quizzed by former ABC Catalyst presenter Graham Phillips on everything from camp logistics to scientific discoveries. We may have come a little late to the virtual space, but we took you further…. all the way to the campfire! The feedback was terrific.  Click on the arrow to view the film. Scroll down for the Q&A.

We received a number of questions prior to the event as well as during the webinar – not all of which could be answered in the allocated time.

Click this YouTube link to watch the webinar and hear the responses to the questions above. Additional questions received are answered below:

The balls of mud that the wasps make their nests from contain small amounts of charcoal that can be used for ultra-sensitive radiocarbon dating using a huge instrument called an Accelerator Mass Spectrometer at theAustralian Nuclear Science and Technology Organisation (ANSTO) in Lucas Heights, south of Sydney.  The tiny charcoal particles seem to come mostly from burning spinifex and our PhD student Damien Finch has developed very careful methods to extract and purify the charcoal before it is analysed to separate it from any other carbon-bearing material that might be present.  Radiocarbon dating determines the time when an organism died and stopped exchanging carbon with the atmosphere, in this case when the spinifex was burnt in bushfires.  Fresh charcoal at the time it was incorporated in the mud had an age that was close to zero.  When we sample an old nest thousands of years later we get an age that is essentially the time the wasp built the nest, so if this is over a painting, we know the painting must be older than that, or if it is under the painting we know it must be younger than the nest.  Damien has done this on hundreds of wasp nests that are associated with paintings and this method has given us our best idea so far of the ages of the different rock art styles.

The earliest paintings dated by this method are from the ‘Irregular Infill Animal Period’ and, as the name implies, these are mostly of animals such as kangaroos, crocodiles, goannas, fish and occasionally birds and plants, especially yams, but rarely people.  Sometimes the paintings include thylacines which are thought to have been extinct on the mainland for some 4,000 to 8,000 years, so we knew they must have been painted a long time ago, even before we started the dating project. These paintings are all made using purplish-red pigments filled in with irregular brush strokes in a dashed or dotted pattern.  There are some good examples on the KFA website.

This is a question that we have not yet had time to explore with the Traditional Owners, but very much look forward to doing so, now that we have an idea of the age of the various art styles.  Most of the stories we have heard, however, relate to the most recent Wanjina phase of the art sequence, mostly from the last four thousand years, a period when climatic conditions have been relatively stable and much as they are today.

What we do know now from our dating of the earlier art styles is that the oldest paintings date back to the end of the last Ice Age, when the great ice-sheets in the northern hemisphere, especially on North America, northern Europe and Siberia had reached their maximum extent and then started to melt from about 18,000 years ago.  Global sea levels then were about 125 metres lower than today because so much water was locked up in ice. As the ice sheets melted sea levels rose rapidly from about 18,000 until they reached something like their present level around 8,000 years ago.  This was a time of enormous and almost continuous environmental and climatic change and encompasses our best estimates of the time over which most of the pre-Wanjina art styles were painted.  It is more than likely that the changes we see in the art styles are reflecting these changes in the environment and the rapidly changing distribution of land and sea during this time.

We are hopeful that one particular type of mineral accretion, forming within the Kimberley rock art shelters and occasionally in association with the rock art, is capable of recording environmental change over similar timescales to the dates produced for the art (e.g. over ~20,000 years). These accretions may prove key in providing a Kimberley specific, climatic context to the changes observed in the art styles.