The below text and images are taken and adapted from Grahame L. Walsh’s 2000 publication, Bradshaw Art of the Kimberley.

The Clawed Hand Period of the Aborigine Epoch is basically believed to postdate the  Last Glacial Maximum.

The Clothes Peg Figure Period appears to come to a relatively abrupt artistic ‘end’ and, with it, the end of the Erudite Epoch. Many of the schematic CPF forms seem to end in their most sophisticated forms, presumably at the peak of their development, with no evidence whatsoever suggesting a transition of form, deviation of technique, or changed direction of theme. The abrupt end of the Erudite Epoch remains equally as mysterious and fascinating as its sudden appearance.

The earliest following artistic works superimposing the CPF involve motifs so totally alien in all respects that it is difficult to imagine that they originate from the same country, much less the same geographic region. There is little problem in identifying the later art forms, which collectively involve broad brush strokes, which at best could be termed a very ‘naive’ form. The fine brush strokes of obviously accomplished artists, portraying figures with clearly intimate understanding of muscular form, vanish forever from Kimberley rock art. This undoubtedly heralds the commencement of an easily identified and remarkably dramatic artistic change, which has been termed the Aborigine Epoch: the final art epoch of the Kimberley.

This period has been named after one of the most consistently recurring (but not the earliest) motif: freehand painted variations of decorated hands, with long, claw-like ‘fingernails’, referred to as the Clawed Hand Motif. These hand motifs, approximately life size, incorporate varying geometric infill on the lower palm, as in ‘C’. A wide variety of geometric infills are found on the lower palm area, and more detailed examples show hair-like protuberances to either side of the fingertip ‘B’. Some quite complex decorative infill develop in some of the later examples, as in ‘A’, which are certainly the remnants of bichrome, if not polychrome, depictions.

The abrupt culmination of the CPF Period brings to an end formal rock art traditions which involved definable form and technique, and had spanned a lengthy duration. Difficulty is experienced in establishing an inventory of the earliest forms of CHP art. Distribution is scattered, and the inherently poor application techniques have resulted mostly in poorly preserved specimens. Examples are few, resulting in infrequent instances of superimposition with later and more developed CHP forms. Differential weathering suggests that the small numbers of early motifs span a long time. Based on the tangible evidence of preceding artistic culture and obviously skilled artists, the appearance of early CHP paintings suggests the infrequent creations of unaccomplished artists who lack any formal artistic tradition. The possibility should not be overlooked that their tradition differs greatly from those preceding, and that the paintings are not the product of artists, but non-specialist members of a small, mobile, and widely distributed population.

Motifs are small, and largely display zoomorphic characteristics. Squat, frog-like images with small flipper-like limbs are relatively common, but may be intended as anthropomorphous rather than zoomorphous beings (A). In this panel, the lighter red broad linework can be seen superimposing the better preserved Mulberry Hue, in which the solid infill legs of an earlier Tassel Bradshaw are depicted.

Genital depiction, often featuring grossly exaggerated and disfigured members, such as the Side Penis on the left figure (A). At times, testicles are added to either side of the member in a quite distinctive arrangement. Such displays of male genitalia cannot be argued as mere elements of gender identification.  The CHP introduces the beginning of a sexual theme previously unknown in the long history of Kimberley art. This theme progressively develops to include graphic  copulation scenes, where the genitals of male figures meander over five metres to join with females lying in promiscuous positions, with upraised legs. This Period introduces obvious changes not only in the role, but also the themes, of Kimberley rock art and reaches its apex during the late Wanjina period, which may  appropriately be referred to as the ‘decadent phase’.

Although of basic zoomorphous appearance, these probably were intended as anthropomorphs (A). These figures, of very basic application, range in size to 310x310mm, and are in superimposition with CHP macropod track and  Clawed Hand Motifs.

The Clawed Hand Period Devil Figures transition of basic characteristics can be traced  through to the distinctive Argula (devil) figures of the Wandjina Period art.

Of interest is the total change of headdress form, most noticeably with the appearance of early, simple forms of Rayed Headdress, frequently depicted decorating blank, circular heads. Headdress transition can be traced through examples of progressively increasing size and complexity. This type of headdress possibly represents the form from which the most recent Wandjina headdress has developed. Its transition is accompanied by a progressive increase in size and complexity, identifiable in a study of headdress in the superimposition sequence.

There also appears a simple but distinctive form of plan view standing anthropomorph, with hanging arms and prominent protrusions from either side of the head, which are sometimes pointed, but otherwise with a simple ‘headdress’ of four rayed bars. These figures commonly have a prominent Bulb Tipped Penis, and the transition of their basic characteristics can be traced through to the distinctive Argula (devil) figures of the Wandjina Period art. These earlier figures are referred to as CHP Devil Figures. An 850mm high discrete panel now portraying Clawed Hand Period Devil Figures. The left (A) is a new creation, with common attributes of Squared Crutch Line, Bulb-Tipped Penis, and Feet-Facing-Opposite-Directions.The figure on the right lacks all three important characteristics, but is comparable from the waist-up alignment. The depiction is the product of modification applied to an existing ‘classic’ Tassel Bradshaw (B) , with its waist-mounted Triple Tassels still visible in Faded Mulberry Hue to the side of the basic overpainting. The anomaly of the two figures’ feet alignment immediately warns of the inclusion of a modified figure.

Where hand detail is added, it involves a very basic but prominent form invariably of only three or four fingers. A common stylistic characteristic of larger CHP anthropomorph variations is a straight Crutch Line separating the legs, from which some form of appendage is suspended (A). A distinctive Compartment Body detail is developed on anthropomorphous and zoomorphic motifs, which has serviced bichrome (and probably polychrome) forms, seeming to have had yellow and white as dominant infill colours. Many of the compartment arrangements constitute a form of Decorative X-Ray interior, which develops to higher levels showing intestines and spines on animals, and foetuses in females (B).

Rare examples of individuals associated with artefacts do exist, showing the Curved Tip Boomerang and a seemingly unique Spade Handled Spearthrower, as in ‘C’.

Rare instances of spears are found impaling macropods, and these are of the Multi-Barb form (D).

The very basic stylistic attributes of the CHP artwork in comparison to preceding styles  make it a relatively easy task to identify examples of modification and retouch applied  to older paintings.

All examples of modified images provide valuable sequence information, confirming that the CHP art must postdate the generic group with which the modified image is associated. In many instances, the type of CHP modification provides additional valuable information in providing an indicator of the time frame which must have separated the two artistic events. 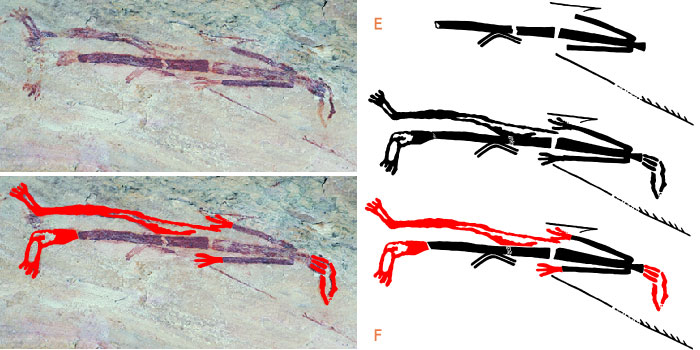 In ‘E’ (black), an uncommon horizontal ‘classic’ CPF has been subject to much later CHP retouch and modification. In the associated graphics, ‘E’ shows the surviving brown-red remnants of the polychrome CPF, originally a plan view figure Standing Close-Legged. In ‘F’ (red + black), the graphic shows the image as it now stands in its modified state. The CHP artist has seen Standing Close-Legged as representing a single leg, so has added a crude ‘second’ (actually third) leg, joined to the figure’s upper side. Feet have been added in the typical, crude, outlined Toed Feet form, Facing-Opposite-Directions. A crude outlined ‘headdress’ has been added to the surviving lower face line, below the missing elements of the yellow face band and white headdress. Crude Three-Finger Hands have been added to the ends of the red upper arm stubs, creating absurd dwarfed arms.

The important evidence of these additions is that sufficient time had elapsed between the creation of the late ‘classic’ CPF and the CHP modification for all evidence of fugitive colours to have vanished. The CPF conventions of figure presentation were totally alien to those practised by the CHP artists, who have added their form of elements to the ‘extremities’ of an existing ‘incomplete body’.

The above text and images are taken and adapted from Grahame L. Walsh’s 2000 publication, Bradshaw Art of the Kimberley.