Investigating some of the world’s most complex figurative rock art

Kimberley Visions is a 5-year multidisciplinary and collaborative archaeological project investigating 50,000 years of human life through the many rock art traditions of the East Kimberley.

Working with Balanggarra Aboriginal Corporation, Rangers, and partners over 1,200 sites have been located and recorded. More than 80,000 high resolution photographs and several thousand ‘meta-data’ records are being researched with an access-controlled database. These sites include rock art, historic campsites, ochre sources, stone arrangements, quarries and living sites. 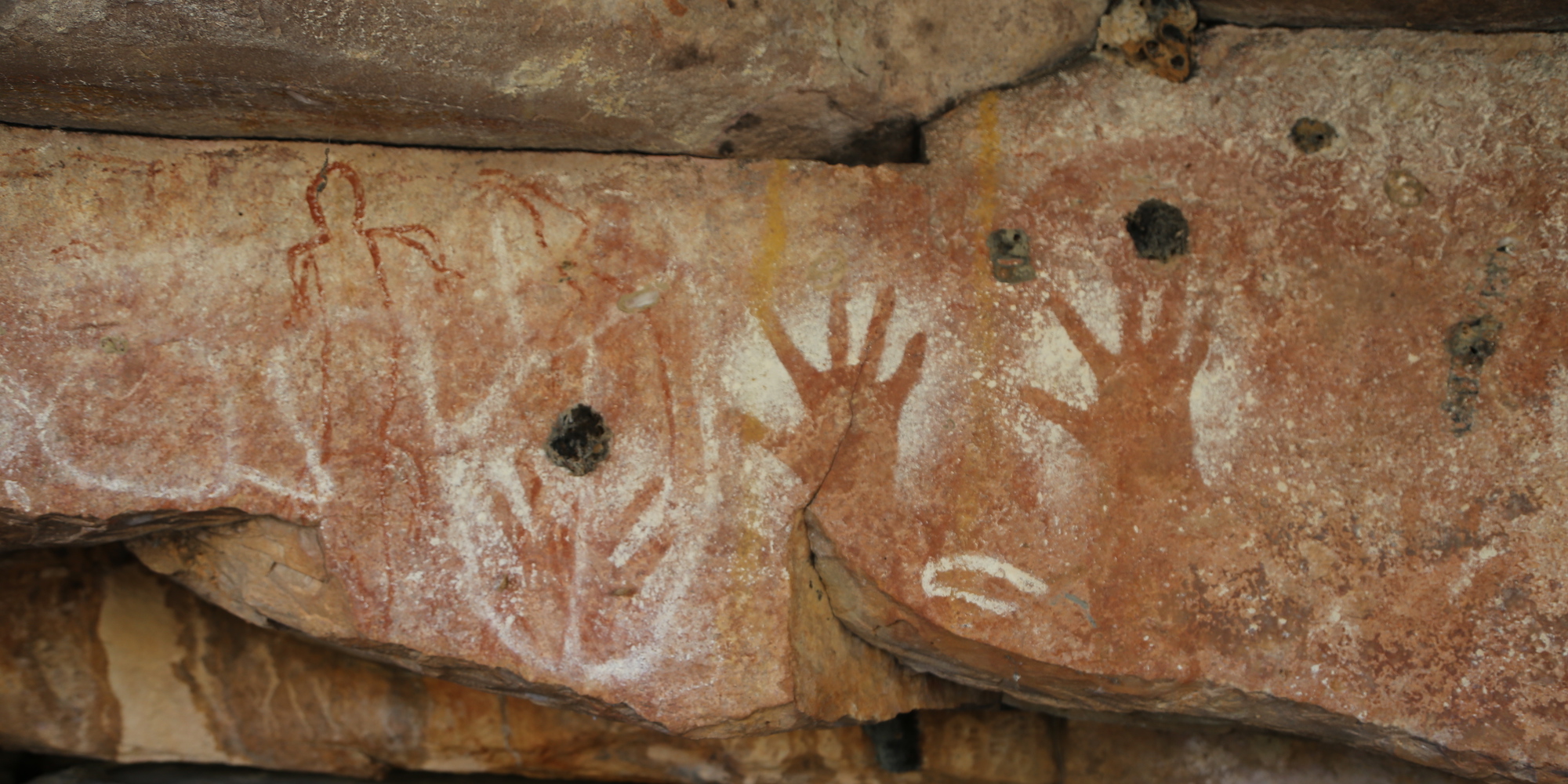 This project helps us understand two things. Firstly, how people lived in this landscape over the last 50,000 or more years. Secondly, how Kimberley peoples connected with groups living in what is today Arnhem Land to the east, desert areas to the south, and Island South East Asia to the north – including the ~400,000 km2 of  ancient plains that are now underwater. We need to imagine a much larger, northern cultural ‘bloc’ of people in the past, using rock art to map and understand it.  Kimberley Visions is at a mature phase with another 18 months to run. Research and recording outputs are being directed towards community engagement and cultural heritage management. This includes establishing site visitation protocols for the public, using ‘right way’ fire to protect sites, advising on impacts of mining and development, and developing rock art sites and resources for use in local communities (schools, tourism) – and nationally/internationally. 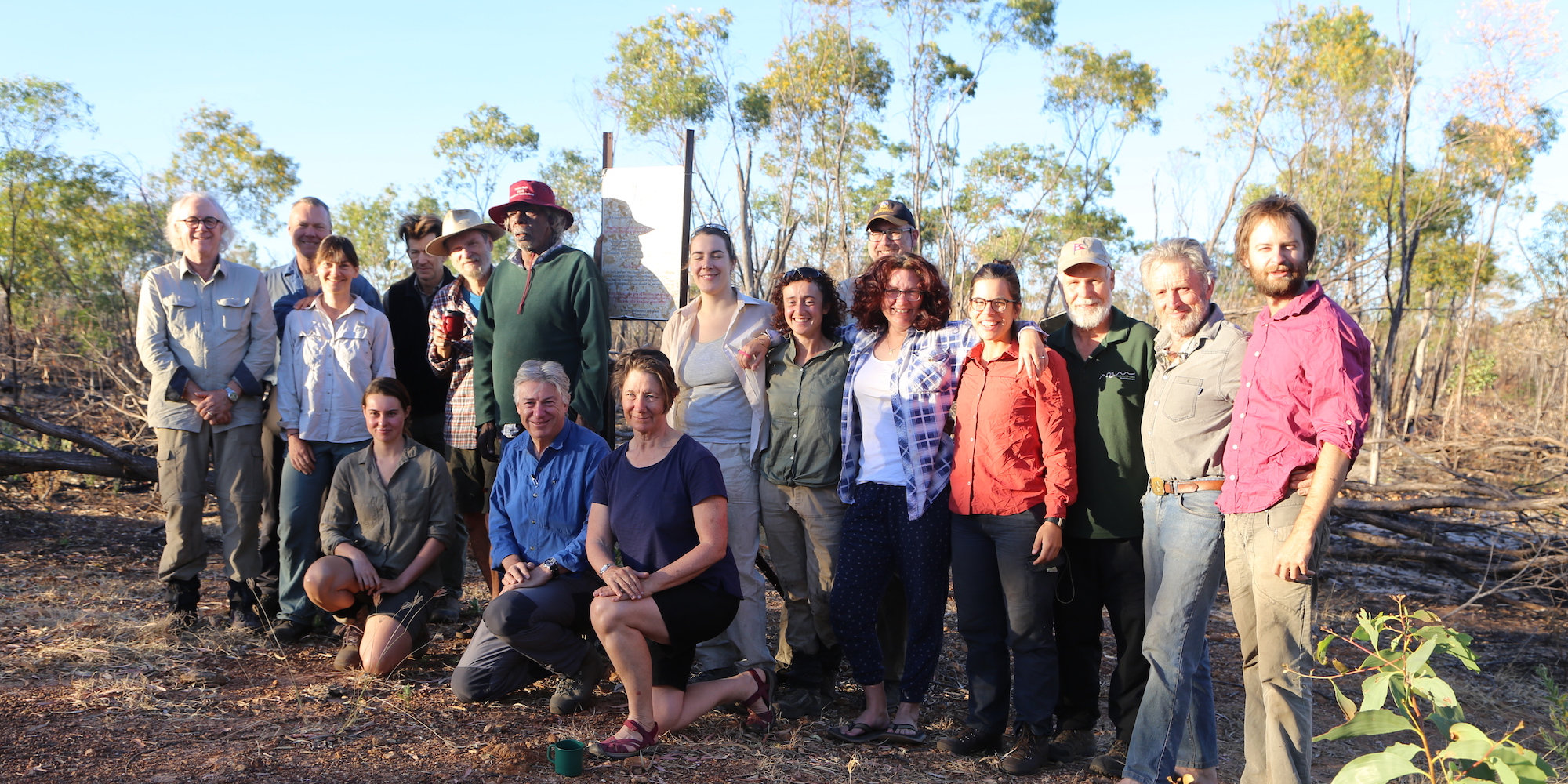 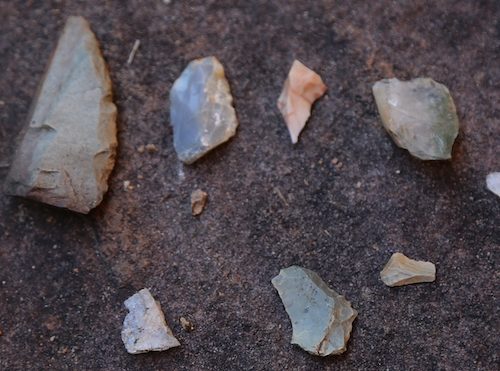 Kimberley Visions is helping train the next generation of archaeologists and the four PhD students are a key part of the team.

6-10 weeks of fieldwork is typically conducted in the dry season June-September with pre and post reporting to BAC Directors and Rangers and advice taken. In 2019 three field camps were held. Two were research-focused along the Drysdale marraran (river) recording sites; two sites were excavated, GIS mapping (thanks to an additional PhD grant by the Kimberley Society), and stone quarries recorded. The third camp at the new DBCA marine base north of Kalumburu focused on community outreach, working with women, recording sites of historic/ethnographic importance and recording rock art sites visited by the public to guide management plans for those sites. 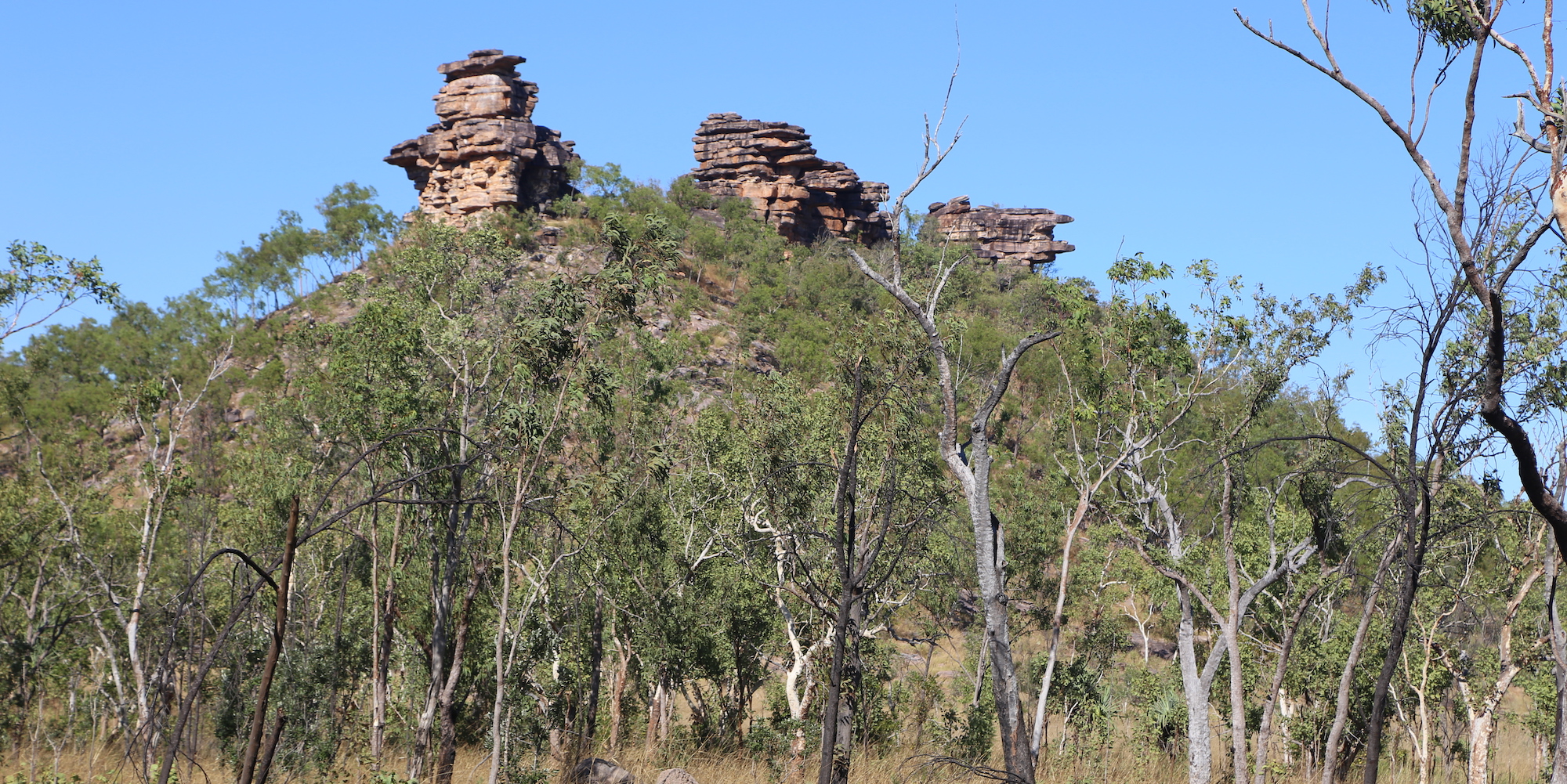 Three field camps were held in 2018 – two on the Drysdale marraran and one on the King George marraran. Finds including an unexpectedly rich set of sites on the plateau, suggesting seasonal use of the wider landscape. Drones helped map landscapes for use in understanding past human movements and site choice. The Kimberley Society provided grants to PhD students to access more remote areas as well as pay for radiocarbon dates from excavation of a rare large open site plus two others combined with rock art and site recording.

The 196 research days in the field have far enabled > 460 on-country days for Traditional Owners. Additional outreach includes:
• Back to Country visit by Kalumburu Junior Rangers to the King George River
• Interactive classes and site visits with Wyndham and Kalumburu primary school and high school students
• Bringing Traditional Owners to UWA’s Research Week
• A dedicated field trip to Kalumburu and environs recording women’s experiences, ethnographic sites, and advising on rock art site management
• Our 2021 work will be base in Wyndham, combining research into this crucial eastern rock art region, with community outreach. 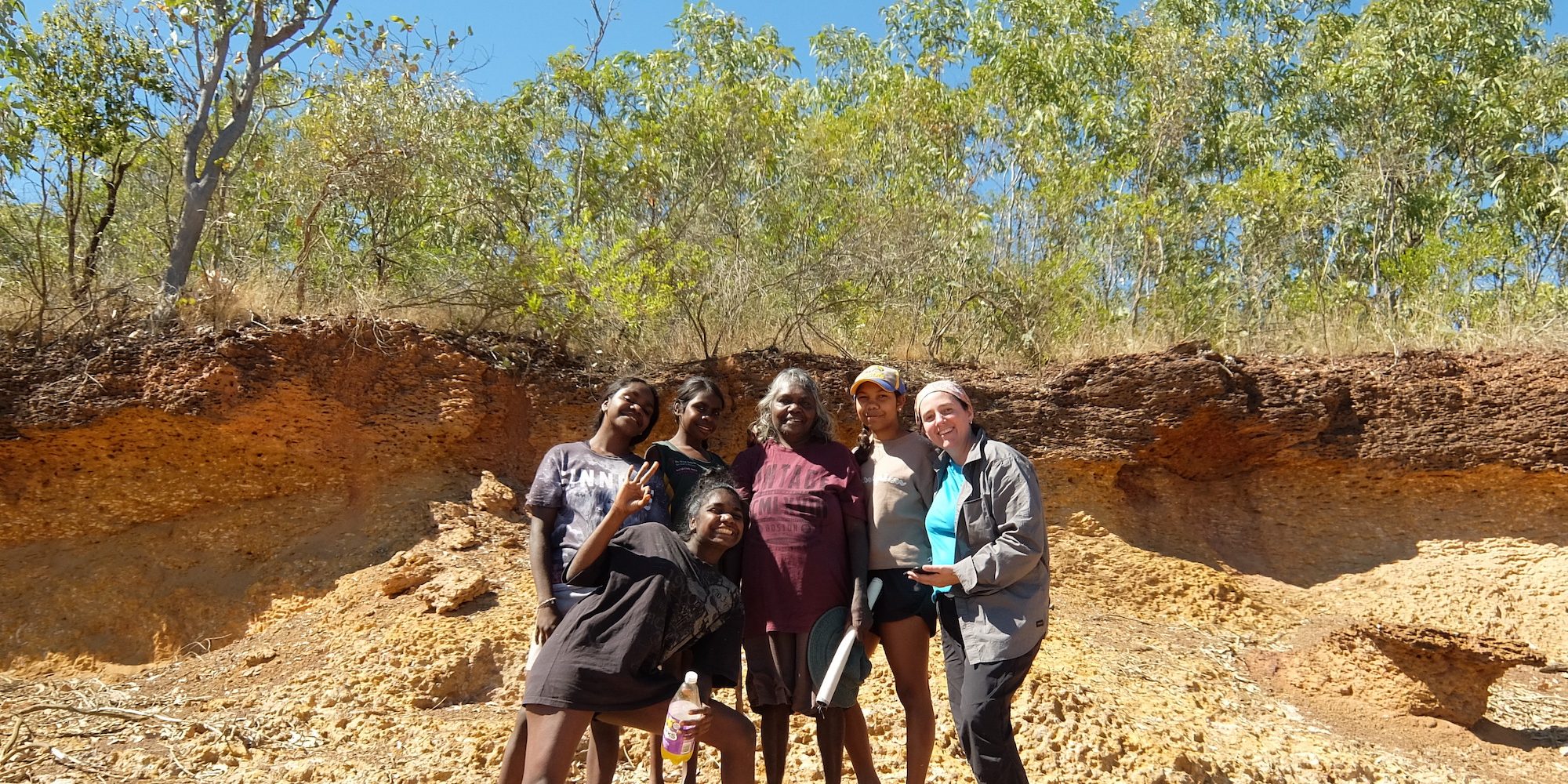 Seven peer-review partner-authored collaborative papers have been produced to date. These include the 50,000 year old Minjiwarra site – one of the Kimberley – and Australia’s oldest known sites. A new rock art style – ‘Stout figures’ was identified and meticulous excavation that found ochre droplets left by painters over 3,000 years ago was found in archaeological deposit using pioneering micomorphological techniques. More than a dozen papers are in press or pre-press, and a book is underway. Findings have been presented at over 200 conferences.

The project has had input into current reviews of Western Australia’s Aboriginal Heritage Act by the Department of Planning, Lands and Heritage. The National Museum of Australia in Canberra has approached the team regarding future showcasing of the Kimberley’s cultural heritage, and the relationship continues with the Western Australia Department of Biodiversity, Conservation and Attractions on managing cultural sites on public lands and informing public policy.

You can make a difference:

It bears a close resemblance to one of the earliest Kimberley rock art styles. This research including KFA-backed research is the latest in a string of findings that is re-shaping ideas about human migration. It has shifted the focus of early archaeological research from traditional Western hotspots to Australia’s doorstep.

You can ensure the rock art is recognised for its international significance and protected accordingly by leaving a bequest to the Kimberley Foundation Australia. If you wish to make a bequest we welcome the opportunity to meet you and answer any questions or discuss specific details with you.

Contact us today to start a conversation about how you want to get involved. Complete the form with your details and we’ll get back to you shortly.

ShareGift Australia is a public ancillary fund with Deductible Gift Recipient (DGR) status. The process is straightforward and shareholders receive a tax deduction for donations over $2.00.

The process to donate shares to support KFA is simple: